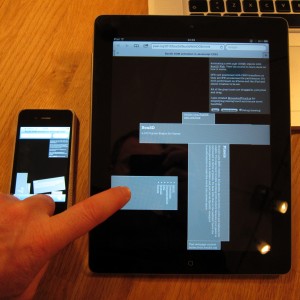 Now this is what I call responsive design!

You may have seen fun projects/demoes where a webpage is demolished using lifelike physics animations. Wario Land Shake It is a good example of that and it’s also allows the user to drag page elements around after the video is done playing. This however is created as a full page Flash, trying to look like a HTML page. Similar cases has also been done just by pre-rendering all into a video. So I wanted to have a go at doing this in HTML, as I haven’t seen that done before.

Continuing on what I learned creating my previous post about Box2d for JavaScript, I wanted to take it a step further replacing the debug renderer with elements from a webpage. The elements should be working as a blue print for the Box2d objects, and the transformation into the physics world should be transparent. I created a quick webpage using <div> elements with some mockup content and started on the steps to make it work:

Ok, thats quite enough talk already. Go ahead and take it for a spin! Make sure that you drag the elements after they have been dropped

And please comment, esp. on my novice setup on the MouseAndTouch.js as a standalone tool.

For those of you that like more technical details, here are some things I found in the development process: